What Do You Mean You’re Not Tracking Your Campaigns?

Almost as ineffective as not having specific, well-defined marketing campaigns to begin with, is not measuring those campaigns within a given marketing channel. How can you know where a campaign needs work (e-mail marketing, social media, PR, advertising), if you can’t see details on where it’s performing and where it isn’t? Here is what campaign tracking should look like:

[Already Running Campaigns – Just Need to Track Them? Jump Ahead!]

Step One: Map Out Each Potential Target Audience For Your Marketing

A campaign is a simple, sustainable concept aimed a particular target audience, to convey a particular value proposition in the service of a particular business goal. Let’s say you’re a disaster relief fund that funds efforts from a discount card program. Corporations buy these cards in bulk as part of an employee benefit program you sponsor; that’s one audience. Their employee are an audience too, so you’ll need marketing around that audience; that’s two. You also work with community organizations that provide these cards to their constituents, and you even sell them for a nominal fee to individual consumers. That’s two more audiences; four so far. Finally, the businesses that provide discounts to holders of the card, pay your non-profit a fee for the promotional opportunity the card provides. You have five potential target audiences, and there may be multiple value propositions involved for each of those audiences. You can’t design effective campaigns until you take stock of all of that. Do the work; it will pay off with maximum clarity. 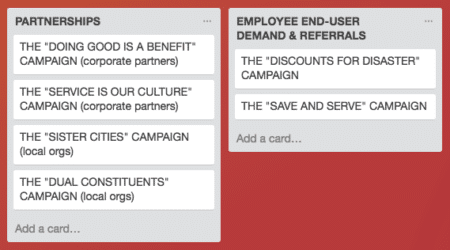 A single campaign will focus on only ONE of those audiences. Of course, you can run four or five campaigns at a time, aimed at different target audiences, or at one target audience with a different value proposition per campaign. How you structure your campaigns will depend largely on prioritizing your immediate and long-term business goals. What will NOT be very effective is a shotgun approach to marketing that puts every audience in one bucket and merely posts a lot of general “content”. The default is for organizations to ONLY send out “whatever we happen to be doing or thinking” e-mail blasts; or they merely “maintain” their social media. Advertising and PR tend to become lackluster without clear, current, active campaigns to guide them. If you aim at everyone in general, you will hit no one in particular. You must define your campaigns. A campaign consists of a target audience, a value proposition, and a memorable and sustainable concept on which to hang it. By sustainable, we mean that you can generate lots of content for the campaign over time, across multiple marketing channels (email pieces, social posts, blogs, ads, and even elements of timely PR conversation and stories). If you can’t envision getting out more than one or two items for it, it’s a topic, not a campaign. By memorable, we simply mean a good working title, even if you never tell anyone outside the marketing team what you’ve called it. For example, an “It Doesn’t Have to Suck” campaign doesn’t have to use a hashtag like #itneednotsuck but it could. It’s up to you. You just need a short hand for collaborating over a shared concept. You will also use the name of the campaign when you’re tracking its performance. When your marketing team has consensus over their interest in and the feasibility of a campaign, you can go live to the ‘field’ and start putting effort behind it. Your campaign is launched.

A campaign is an experiment, but you’re not going to get any real insights from it if you don’t attach measurements. It’s simple to do. Assume you have your site plugged into Google Analytics; if not, consider that a first step. So, let’s say you’ve written a piece of content for your blog that goes with a campaign you’ve called “Discounts for Disaster” (it may be in poor taste, but we’re making this up). The post is called “Saving Money Saves Lives”. You want to distribute that content in e-mail and social. In your e-mail blast or newsletter, any link you include that goes back to that post on your website should not be a bare URL, like https://yourwebsite.com/blog/2016/save-lives. Instead, use the Google’s Campaign URL builder to add campaign data to the URL. Tell the URL builder that the campaign source is “newsletter”, the medium is “email”, and the campaign name is “discounts_for_disaster”.  You can also tell it which content you’re linking; use some consistent short hand phase like “save_lives”. The URL it spits out is a campaign URL. It’ll look something like this:

Use that URL, and Google Analytics will be able to see exactly how your “Discounts for Disaster” campaign is performing so far in e-mail. If you’re promoting that post in a social media venue like twitter, as part of your campaign, you can change the campaign source in the Campaign URL Builder to “twitter” and the campaign medium to “social”. If you’re doing a lot of these links, you’ll get used to it pretty quickly and may find notepad or a spreadsheet faster than the Google’s URL Builder, but it’s very fast. Don’t like how long that URL is? Read on…

Here are examples from email and social 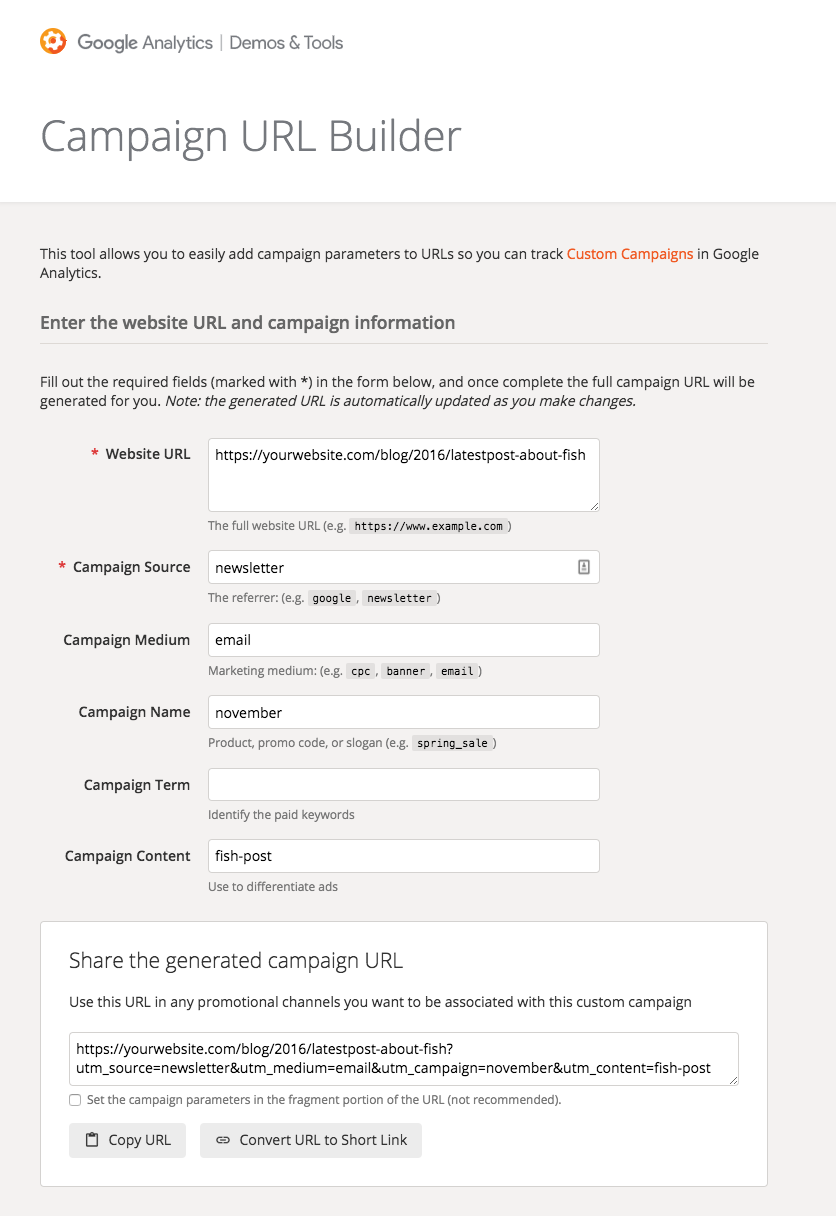 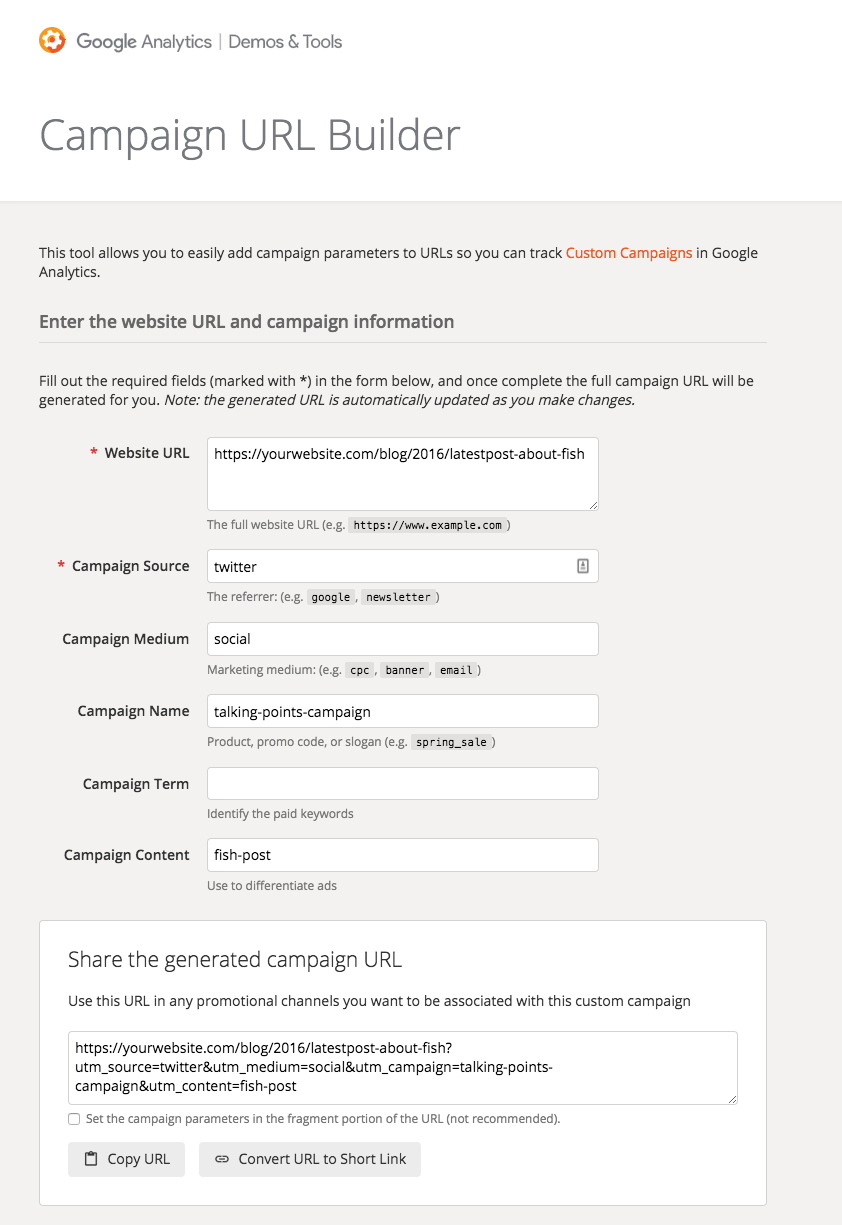 Don’t forget traditional marketing. It’s not only 100% digital environments that use campaign tracking. If you’re giving a live presentation, that can be part of a campaign (a series of event marketing efforts around a central idea). You can announce a unique URL to your audience, and measure the results in your analytics over time. Sure, URL builder URLs are quite long by default, but there’s a built in URL shortener that produces a really tiny one. If you’re slightly more technically savvy, you can create a custom one like https://tinyurl.com/hitmeupdude or https://madpi.pe/comefindme that is easier to write down or remember. Similarly, you can include such short, trackable URLs on physical mailers and other marketing collateral.

You can track the performance of campaigns over time in Google Analytics under Acquisition > Campaigns. It may be appropriate for some campaigns to set up specific conversion goals, so you can measure conversion rate and sources; that will vary depending on the action or outcome you want from each campaign. Alternately to looking at Google Analytics directly, if your marketing department has a digital dashboard that tracks marketing metrics (we build one for every client, at MadPipe), you can watch performance there. Don’t jump to any knee-jerk conclusions, though. It’s easier to misinterpret analytics, than the interpret them carefully and thoughtfully. A campaign that isn’t performing, may not be optimally implemented, or you may need to revisit how it’s being interpreted, or the key ideas behind the campaign. It may be that it’s working well in one channel (e.g. social), but not another (e.g. e-mail or advertising). That’s not a cue to abandon a channel; the campaign may need to be adapted better for a given channel, or it may be that the audience you’ve accumulated in one channel differs in some crucial way from the others. Measure, but don’t obsess over small changes – it’s not about any one post – it’s about the campaign as a whole. Don’t conclude anything quickly (a campaign is about sustained effort over time), and don’t jump to conclusions. There are additional measures you can take, especially in social, to accelerate testing and improvement of campaigns. MadPipe can consult with you over this.

Periodically, look in on what each channel is doing to support a given campaign. Make sure it’s not business as usual, or campaigns aren’t growing stale for lack of new creative input. Don’t let channels become silos, but look at them together and contribute ideas, so each marketing professional can put their full weight and support behind your team’s efforts. You’re much more effective running a campaign that isn’t a success, realizing that over time, and changing it, than doing “whatever” for any length of time at all. Thomas Edison ran 200 experiments that didn’t produce a light bulb, before coming to the solution. When asked “what was it like to fail 200 times?”, he answered “I didn’t fail 200 times; it was a 200-step process.” It’s unlikely it’ll take 200 steps to get your campaigns right at the brainstorming and planning phase, or right at the implementation and adjustment phase. But it WILL take some trial and error. If you want to sum up the process, it’s simply: plan, brainstorm, launch, measure, review, brainstorm, and adjust. That’s a cycle of continuous improvement.

We’ve focused on TRACKING your campaigns, and provided a tool for doing so. What most companies, brands, and non-profits need help with is the OTHER stuff AROUND tracking. If that’s your organization, reach out to MadPipe, and let us assemble a virtual marketing department around your marketing goals. We’ll plan (and more importantly EVOLVE) a strategy to go and get you what you want want as goals and objectives. Use the contact link below, and we’ll get back with you soon. Until then, cheers! and thanks for reading. 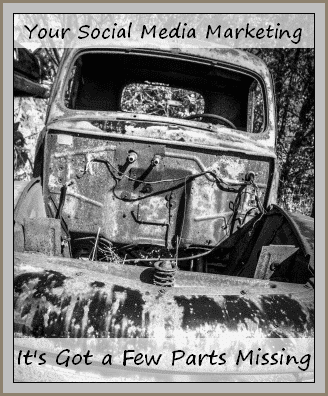