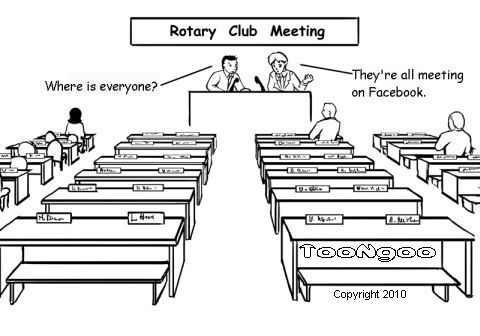 Ask yourself, “where is everyone these days?” When I was a kid, groups and social networking was extremely popular. It’s not something invented in 2004, despite the constant regurgitation of old articles and news vignettes about how networking is helping job seekers and career folks to get opportunities and small businesses to grow. We used to meet at everything from the Rotary Club to Toastmasters. And not to knock those cultural institutions – they’re still popular, and I’m sure they’re still effective. We’ve even seen reported growth at such gatherings, and new groups forming, in the wake of the current economic situation. But it’s a drop in the bucket compared to the growth of social media, often for the exact same purposes.

“Pssst! There over here, in Facebook!” I’m betting there are more conversations happening in Facebook every hour, on the average, than in all of those in-person social networks put together in an entire day. Facebook, Twitter, LinkedIn, Youtube, Craigslist, MySpace… that’s where the people are. They’re in social media.

Some would decry this and say it’s depersonalizing everything, and undermining the growth of local cultures Sure, maybe some. Those are reasonable points. But it’s also doing things that weren’t happening before, and which occasional national conventions didn’t solve. It’s letting people in outlying towns, neighboring states, or half way across the globe connect, interact, and yes even exchange referrals and do business. And there are plent of local and regional groups, pages, and entities in social media. Social media is also rich. It maybe isn’t the same as a handshake, but that doesn’t mean it’s necessarily less substantive. The plethora of new kinds of exchanges in social media – from sending someone a virtual beer or flowers, to starting an instant poll on something you said, to tagging one of your photos with commentary and sharing it with one’s own audience (people you had no access to before), social media is like handshaking on steroids. It’s the grip that keeps on giving.

It can water down some kinds of relationships – some business owners find that people coming in off of Facebook, Twitter, or Craigslist can be more savvy and informed, more immune to persuasion, more price and comparison driven, more exposed to a variety of competitors, and often they have a bottom line they’re aiming at that’s already well defined. We get the same kind of traffic at times here at Market Moose. Someone who e-mails “quote me a price” without even a clear idea of what they’re pricing – “for what, exactly?” Often when we suggest an initial consultation to understand their needs, they just move on. Good riddance. Seriously, it’s not Burger King vs. McDonalds. If that’s what you want, go someplace with a virtual drive through – they are plentiful – it’s just not our niche, and not every client is our client. But we do get just as many people who appreciate the difference of a custom fitting over suits off the rack. And if you use social media to inform, advise, offer insight into that difference – if you can make a convincing case, without pitching everyone, without sounding like an ad, for a different kind of service, then you can really see your business grow from social media.

If all you’re offering is, “Hey, I’m in Facebook too. Buy my stuff.” you’re going to get a steady stream of “Why should I pay you more than the next guy’s bottom dollar?” I mean seriously, do you look left and see gas at $2.49, look right and see the same gas at $2.09 and think “same difference”? You’ve either got to *be* different, and communicate the importance of difference, or you’ve got to run out to the sign and slap a zero over the four, and then it’s just you and them and a price war. It’s like the housing market is right now – you’ve got to throw in a flat screen TV to bribe the buyer, because listings are everywhere and, often, it’s all being presented as just square footage – it’s a commodities market.  Your services are going to be a commodities market, too, if you don’t set yourself apart. We’ve written before about “marketing differentiators“, so we won’t go into it again here.

But once you’ve decided on your niche, your market, and made yourself unique, it’s time to make yourself the obvious choice, and that means getting into social media and creating a culture and a following around your ideas, your difference, your independence from the commodities pricing that’ll kill your competition, while your difference insures your survival and growth. Do participate in in-person social networks, if you’re a locally based business (that’s *participate* not show up and hand out business cards). But if you really want to reach numbers, use social media effectively, and you can often connect with a bigger set of prospects in an hour than in a month of hand-shaking. Again, not knocking the Rotary Club, but some of them get this fact and are adapting for precisely these reasons. If you’re in Facebook, for instance, check out the Rotary Club of Santa Paula, California. 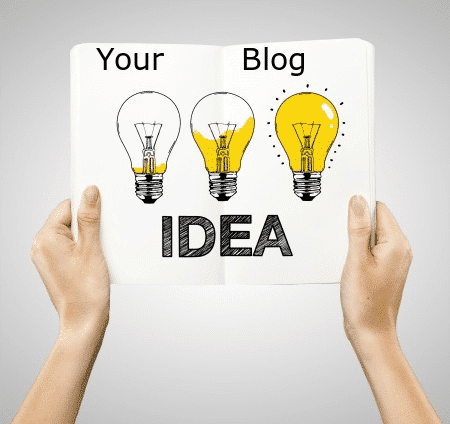 Who Runs Your Marketing? 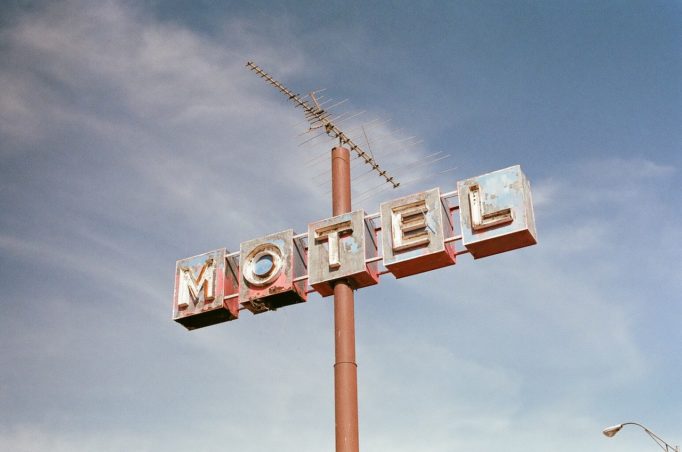 How Does Google Know if I Copy?